By accepting you will be accessing a service provided by a third-party external to https://www.naturalplaygrounds.com/

‘Bringing in Risk’ to Build Resilience in Britain’s Playgrounds 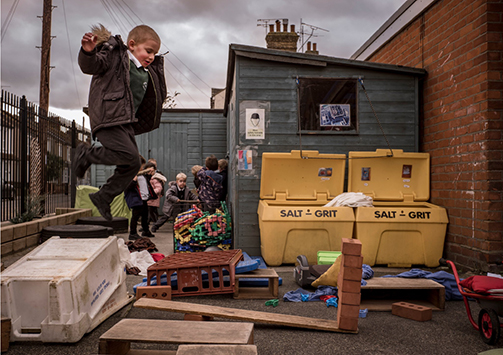 Educators in Britain, after decades spent in a collective effort to minimize risk, are now getting into the business of providing it. Note the boy about to send a pile of bricks flying at the risk-enhanced playground at the Richmond Avenue Primary and Nursery School in Shoeburyness, England.

Four years ago, for instance, teachers at the Richmond Avenue Primary and Nursery School looked critically around their campus and set about, as one of them put it, “bringing in risk.”

Out went the plastic playhouses and in came the dicey stuff: stacks of two-by-fours, crates and loose bricks. The schoolyard got a mud pit, a tire swing, log stumps and workbenches with hammers and saws.

“We thought, how can we bring that element of risk into your everyday environment?” said Leah Morris, who manages the early years program at the school in Shoeburyness in southeast Britain. “We were looking at, O.K., so we’ve got a sand pit, what can we add to the sand pit to make it more risky?”

Now, Ms. Morris says proudly, “we have fires, we use knives, saws, different tools,” all used under adult supervision. Indoors, scissors abound, and so do sharp-edged tape dispensers (“they normally only cut themselves once,” she says). 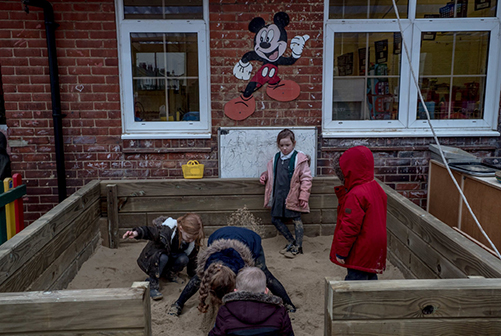 Sand has been used more sparingly in public playgrounds in recent decades because of the danger of hidden glass or animal feces, part of the “sterilization” of play that risk advocates complain about. Andrew Testa for The New York Times

Limited risks are increasingly cast by experts as an experience essential to childhood development, useful in building resilience and grit.

Outside the Princess Diana Playground in Kensington Gardens in London, which attracts more than a million visitors a year, a placard informs parents that risks have been “intentionally provided, so that your child can develop an appreciation of risk in a controlled play environment rather than taking similar risks in an uncontrolled and unregulated wider world.”

This view is tinged with nostalgia for an earlier Britain, in which children were tougher and more self-reliant. It resonates both with right-wing tabloids, which see it as a corrective to the cosseting of a liberal nanny state; and with progressives, drawn to a freer and more natural childhood. It is also supported by a growing list of government officials, among them Amanda Spielman, the chief inspector of Ofsted, the powerful agency that inspects British schools

Ms. Spielman has poked fun at schools for what she considers excessive risk aversion, describing as “simply barmy” measures like sending schoolchildren out on city field trips in high-visibility jackets. Late last year, she announced that her agency’s inspectors would undergo training that will encompass the positive, as well as the negative, side of risk.

“Inspections will creep into being a bit more risk-averse unless we explicitly train them to get a more sophisticated understanding of the balance between benefits and risk, and stand back, and say ‘It’s O.K. to have some risk of children falling over and bashing into things,’” she said. “That’s not the same as being reckless and sending a 2-year-old to walk on the edge of a 200-foot cliff unaccompanied.” 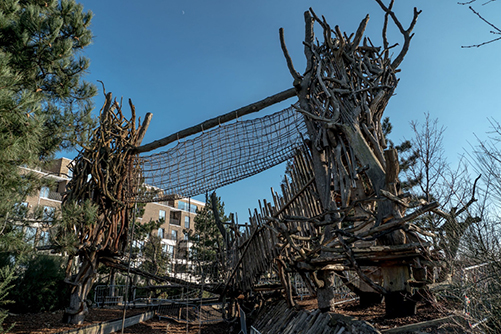 Organic materials, in this case climbing towers made of gnarled boughs lashed together with willow wands, do not come with factory certified safety guarantees. Credit Andrew Testa for The New York Times

Britain is one of a number of countries where educators and regulators say a litigious, protective culture has gone too far, leaching healthy risks out of childhood. Guidelines on play from the government agency that oversees health and safety issues in Britain state that “the goal is not to eliminate risk.”

Australia last fall introduced new standards for playground equipment, instructing operators to consider the benefits, not just the risks, of activities that could result in injuries. Cities and school districts in Canada and Sweden are following suit. (In the United States, a country with far higher litigation costs, government agencies overseeing play safety are not known to have made any such changes.)

The shift to seeing some benefit in risk, advocates say, signals the end of a decades-long drift toward overprotecting children.

Beginning in the late 1970s, parents were buffeted by warnings about hidden dangers on playgrounds and predators lurking in suburban neighborhoods. Behavior changed: In England, the percentage of schoolchildren who went to school unaccompanied dropped from around 85 percent of 9-year-olds in 1971 to around 25 percent in 1990, a team of British researchers found. 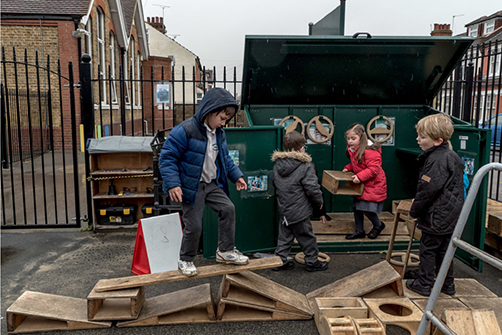 Britain is one of a number of countries where educators say that safety precautions have gone too far, leaching healthy risks out of childhood. Andrew Testa for The New York Times

“It’s a rubber floor, a little structure surrounded by a fence, it’s like a little play jail,” she said of playgrounds in the United States. “As a grown-up, you’re sitting there on your phone, waiting for them to be done.”

Ms. Talarowski, who was struck by how much more adventurous playgrounds were when she moved to London in 2015, threw herself into gathering data. Using a quantitative tool developed by the RAND Corporation, a research center, she used video to track the behavior of 18,000 visitors to London playgrounds, then compared it with similar data on visitors to American parks.

The findings suggested that exciting equipment had a pronounced effect: The British playgrounds had 55 percent more visitors over all, and children and teenagers were 16 to 18 percent more active. The features that held visitors’ attention the longest — sand, grass, high swings and climbing structures — were elements American park managers use sparingly, because of high maintenance costs and the risk of falls, Ms. Talarowski said.

In Britain, though, risk has become something to (carefully) brag about.

“It’s about exploring controlled risk, risk that we’ve carefully designed,” said Chris Moran, manager of Queen Elizabeth Olympic Park, as he led guests through Tumbling Bay playground, built in 2014 at a cost of more than $1.5 million. “We’ve got the gorse bushes, which are quite spiky,” he said. “The child will touch it and learn it is a spiky bush.” 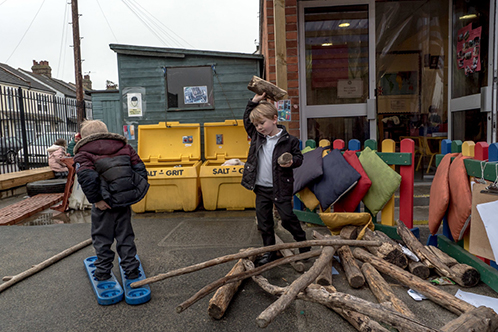 To enhance risk levels, this playground in Shoeburyness, Britain, was equipped with stacks of two-by-fours, crates, loose bricks, a mud-pit, a tire swing, log stumps and workbenches with hammers and saws. Andrew Testa for The New York Times

Aspects of Tumbling Bay, with its tall tree houses and wobbly bridges, would make an American park manager blanch. Its 20-foot climbing towers, with natural, gnarled boughs lashed together with willow wands, were made by hand, not in a factory (which would share legal liability in case of an accident). Waving prairie grasses stand higher than the head of an adult (which could block sight lines.) There are expanses of sand (could contain animal feces or sharp objects) and boulders (no manufacturer, no shared legal liability.)

The park requires an intensive safety inspection regime — half of it has been barricaded off since November so that rotten boughs can be replaced — but, so far, any injuries have been minor ones, Mr. Moran said. “We’ve always won the argument,” he said. Underlying the difference in play is a difference in law. The United States uses the jury system for personal injury cases, and liability costs, as a percentage of gross domestic product, are more than double those of most eurozone economies.

In addition, American families must “find someone to blame to cover the cost” of medical care, unlike their counterparts in European countries, which have socialized health care, said Ellen Beate Hansen Sanseter, a Norwegian professor of education. “In Norway, the society has already paid for it,” she said.

Support for freer, riskier play in Britain has built to the point where even prominent safety advocates endorse the idea. But change on the ground is patchy.

Tim Gill, whose 2007 book “No Fear: Growing Up in a Risk Averse Society” became a handbook for the movement, ascribes this to bureaucratic inertia, and to a sharp drop-off in government investment in play that occurred in 2010, when the Conservative government introduced austerity measures.

And society recoils every time a child is seriously hurt on a playground. Playground deaths are extremely rare — they occur once every three or four years in the Britain — but they tap into a parent’s worst fear, and are amplified by widespread reporting.

In 2015, Vida Kwotuah was sitting on a bench in a park in London a few yards away when a tree trunk supporting a swing toppled and crushed her 5-year-old daughter, Alexia. Ms. Kwotuah ran to Alexia, but the child’s body had already begun to swell. A few seconds later, she said, “it was like every single blood from her system came out.” The base of the tree trunk, she observed, was “powdery.”

More than two years later, investigators reported that back in 2011 a contractor, known in the transcript as “Individual A,” had unwittingly purchased the trunk of a poplar, which decays rapidly when placed in the ground, mistaking it for oak, a harder wood. Ms. Kwotuah received a financial settlement from her borough council, and parks throughout Tower Hamlets, her neighborhood in East London, underwent strict safety audits.

One such audit found that a popular climbing structure, open since the early 1980s, presented “a medium to high risk potential for severe to fatal injuries,” leading to its closure, said Andy Bate, a spokesman for Tower Hamlets, which manages the playgrounds. 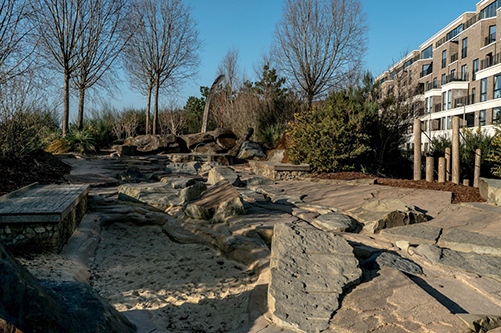 “We’ve got the gorse bushes, which are quite spiky,” said the manager of Tumbling Bay playground in London. “The child will touch it and learn it is a spiky bush.” Andrew Testa for The New York Times

Such re-evaluations occur regularly after playground tragedies, even if they are statistically insignificant, said David Yearley, of the Royal Society for the Prevention of Accidents. “As a society, it’s difficult to say, ‘We need to accept a one in 60 million chance of death,” he said.

Ask the teachers at the Richmond Avenue Primary School, though, and they will tell you that exposing children to limited risks now, while they are young, will help them survive. In 1903, when the school opened, its purpose was straightforward: to provide the children of fishermen and farmers with basic literacy and math, enough to take over their parents’ vocation, said Debbie Hughes, the school’s head teacher.

“We’re very proper, aren’t we?” she said. “We have always done as we were told.”

But rule followers are unlikely to be rewarded in the future, said Ms. Hughes, whose twin 19-year-old children have just entered the work force. As she thought through these changes, a towheaded kindergartner nearby had fashioned a catapult, stacking seven bricks on one end of a wooden plank and jumping solidly onto the other end, sending the bricks flying into the air, over the heads of his playmates.

“You’ve got to get out there and find your position in the world,” Ms. Hughes said. “If you don’t give those children those creative skills, that risk, that take a chance. If they don’t have all that risk out there when the child is four, the adult isn’t going to do that.”

By ELLEN BARRYMARCH A version of this article appears in print on March 11, 2018, on Page A1 of the New York edition with the headline: In Britain, Learning to Accept Risk, and the Occasional ‘Owie’. Order Reprints

Stay up to date by subscribing to our newsletter.